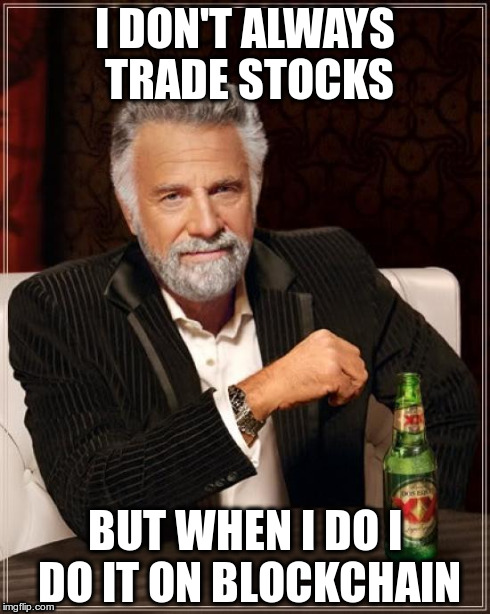 Let’s continue our coverage of crypto securities, there’s some great news to discuss. Overstock.com, a major online retailer which started accepting Bitcoin several months ago, has announced its partnership with Counterparty developers – Crypto 2.0 based on top of Bitcoin network. Counterparty was one of the first projects (along with NXT) implementing a decentralized stock exchange based on Blockchain technology. Patrick Byrne, Overstock founder, plans to build fully compliant distributed marketplace on top of Bitcoin network. This is an epic endeavor, and may be a harbinger of tectonic shifts in future, and that’s why.

Most people involved in crypto consider it to be completely incompatible with current legislation. Using blockchain tokens as currency blows the state monopoly for issuing money, using tokens as company stock certainly seems to undermine current stock market compliance practices – there’s no underwriter bank, no market maker, no centralized exchange to trade on. At the first sight it seems to be an instrument for crypto-anarchists, technology which is destined to be marginal with no chance of becoming mainstream.

But is this the technology itself or our perception of the technology? What is wrong with using a distributed database to keep track of market orders? I don’t think that there’s anything wrong with it even from the current legal system point of view. Blockchain technology may be incorporated in current financial world, no matter whether you like it or not.

Current success of Ripple, decentralized money transfer system, some kind of traditional p2p network with gateway nodes used for money transfers, proves this. Ripple has already signed several banks in US and Germany to use it money transfer technology, which allows to convert between various currencies seamlessly and with very low fees.

There’s nothing illegal in Blockchain technology, some major announcements of its usage by major established institutions might occur in not so distant future. There are developments in cryptoworld which will allow companies to issue some kind of gift cards/tokens for its customers, Reddit announced that it will launch its own crypto to reward its users, I won’t be surprised if some bank will issue its cryptocurrency soon.

Returning to stock markets, crypto stock exchanges structure would resemble so-called Direct Public Offer, established (although not very common) practice of issuing company stock and distributing it directly to general public, skipping investment banks. Blockchain technology will cut out the middlemen and reduce costs, that’s exactly what is should do, decentralizing things to make them simpler.

Naturally we cannot expect high frequency trading and very fancy instruments, since Blockchain has its limitations due to latency and distributed nature. But this model might be perfect for crowdfunding (see JOBS act) and start-ups. Also stocks issued on decentralized exchange can be easily traded on a centralized one (check our CNMT asset issued on NXT Asset Exchange and traded at Poloniex.com), thus enjoying high execution speed.

If Overstock succeeds it will definitely show that no technology can be illegal, only its usage can be legal or not. If Overstock fails there will be some other company to show this.
Brave new world might be closer thank we think.